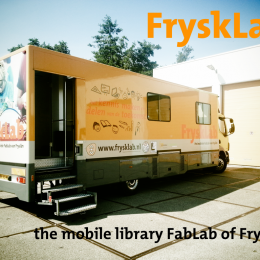 1
Libraries and makerspaces are increasingly approaching each other. In this presentation I would to focus on the reasons why, starting off with this interesting quote of Maxine Bleiweis, director of Westport Public Library in the US. Westport was the first library to incorporate a FabLab, quickly followed by Fayetteville in the state of New York.

3.
In an article for the American Library Association Nicholas Schiller looked at these shared core values, starting with the Library Bill of Rights. He cites librarian Char Booth who distilled this manifesto into five core values: access, freedom, advocacy, inquiry, and openness are the most prominent key concepts.

4
For the hacker values Schiller used the values as described by Steven Levy in his book Hackers: Heroes of the Computer Revolution: sharing, openness, collaboration, and the hands-on-imperative.

5
After putting these side by side Schiller concluded that at least in terms of access to information, public openness, freedom, sharing, and collaboration libraries and hackers are on the same page. There are many things that hackers and libraries can do together to realize a productive collaboration or a cross-pollination of ideas.

6
Looking at some of these values and goals acces to information is one of the most prominent ones. Both provide users by opening up collections or creating their own. The concepts of open source and open access are adhered by both, although the maker movement seems to have less issues dealing with rightsholders, which is a huge problem for libraries.

7
Another important shared value is advocacy regarding issues of public interest. Themes such as copyright reform or privacy are dealt with both by libraries and hackers. Libraries provide their users with information under the umbrella of medialiteracy. Hackers are frequently involved with civil rights groups such as EFF and Bits of Freedom.

8.
Collaboration with their communities is essential for thriving libraries and hacker spaces. Without a community both simply just wouldn’t have a reason to exist. People from the community aren’t just needed to create demand for public services, but increasingly also play a role in offering services themselves, accomodated by library or makerspace.

9.
Increasingly hacking in or by libraries is taking place. A great example is Library Box by Jason Griffey. He hacked the concept of Pirate Box and made it suitable for libraries, for instance respecting copyright and providing acces to a curated collection of copyright free content. Since Libary Box isn’t hooked up to the net it’s also privacy friendly

10.
Another project is something we did in Leeuwarden public library. In collaboration with the local hackerspace we realized Twitterboom. In this case we did nothing more than involving the community by tickling them to send Christmas wishes to a Christmas tree in the library using Twitter.

11.
Libraries are forced to reevaluate their place in society. The concept of Library as Platform, propagated by David Lankes and David Weinberger, is increasingly accepted in the library world. Maintaing and curating collections aren’t the only reasons why libraries are needed. Knowledge exists everywhere and libraries should accomodate sharing.

12.
Obviously the platform theory has some practical implications. Librarians should look at the concept of collections in another way and keep in mind that information is not only present in acquired content, but also in living social networks. A hacker can be looked at as a living book that should be part of an information infrastructure.

13.
Lankes most powerful statement is Stop lending, start sharing which basically says it all. Libraries should broaden their vision of collection and information. The concept of FabLab in a library is one of the possibilities he mentions quite often.

14.
Both the platform theory and the aforementioned shared values of libraries and hackers made us think about setting up our own library FabLab in Fryslân. We specifically chose to set up the lab ourselves in order to control the relationship of library and FabLab. Because of the rural environment we chose to have a mobile lab.

15.
The main reason to start the FabLab though are some challenges that are specifically important for the province of Fryslân: for instance more youngsters leave highschool without a diploma, eventually leading to a stagnant employment market. With the lab we want to create an early and attractive interest in technology and 21st century skills.

16.
This made us think about our initial approach. Reaching children and youngsters should be through the educational system. Furthermore we are focusing on relevant local themes such as craftmanship and water technology. We will incorporate this in specifically designed lessons and workshops. Our pilot will last three years.

17.
To start things of we organized a session last February for which we invited potential partners, such as education professionals, local government, entrepeneurs and other libraries. We put our plans on the table and invited them to comment and think about it. Shortly after that we organized a business model canvas sessions for which we also invited other parties. A very positive outcome of this session was a growing trust in our project, particularly the officials of the city of Leeuwarden.

18.
Besides education we’re also planning to develop programs for other target groups. For instance open design labs for entrepeneurs. We’re also participating in public events, such as Serious Request. And we’re proud to be part of the Leeuwarden 2018 bidbook and long term cultural agenda of the province of Fryslân and the city of Leeuwarden. Herein they stated they want to be the cradle of the mobile FabLab.

19.
There’s a numer of reasons we chose to become a FabLab, instead of a makerspace. The main one being part of a worldwide community. We chose to be it ourselves because of the responsibility towards schools and education. They have to depend on us, so we want to secure our services.

20.
We’re still in the proces of getting more funds for FryskLab, but are confident in realizing our goal. We especially encounter a lot of enthousiasm when we are presenting our project for teachers.