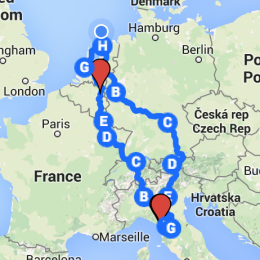 FryskLab, Europe’s first mobile library FabLab (fabrication laboratory) from the Netherlands, is going on an European road trip February 2-18. During the trip there will be a dedicated focus on developing tools and services for people with visual/reading disabilities. The destination is Florence (Italy), where FryskLab will participate in the conference The Art of Invention, organized by OCLC. FryskLab, a former book mobile turned mobile library lab, is a project of Bibliotheekservice Fryslân (BSF).

FryskLab will embark on a two-week tour of Europe which will include visiting Germany, Austria, Switzerland, Luxembourg and Belgium, as well as Italy, France and The Netherlands. In every country the FabLab team plans to hold workshops with a focus on making. During the trip there will be a dedicated focus on developing tools and services for people with visual/reading disabilities. For this BSF collaborates with several professional partners: Stichting Aangepast Lezen, Sectorinstituut Openbare Bibliotheken (SIOB), Dedicon, Christelijke Bibliotheek voor Blinden en Slechtzienden (CBB) and OCLC.

In Florence Frysklab will take pride of place outside the beautiful Villa Vittoria where the meeting is being held to enable everyone attending to explore the facility and ask its dedicated staff questions or have a go with the equipment in the bus, consisting of 3D printers, vinyl- and lasercutter and electronic and programming tools such as Makey Makey, Little Bits and Scratch. Jeroen de Boer, New Media Specialist at BSF who manages Frysklab, will also be giving a talk at the meeting in one of the breakout sessions about makerspaces and libraries.

In the province of Fryslân (the Netherlands) FryskLab is used to bring making, digital fabrication and 21st century skills to primary and secondary schools, as it addresses the socio-economic challenges of the region. The lab is also used for several other library programs, for instance Fab the Library!, a series of modules to help other libraries set up makerspaces or FabLabs.

“As a library we notice the need for dedicated knowledge and we want to stimulate innovation,”

“The library is a natural knowledge habitat. In Europe, we are the first library with it’s own FabLab. And we move on. Together with schools and local businesses we are seriously looking into the possibility to set up a long-term educational program to include digital fabrication in the curriculum.”

Working on our route for #MakerTour2015

Last week we decided what our route to and from Florence should look like. We decided upon an combination of not too long daily distances and stops at interesting labs and libraries. Since our appearance at the OCLC Congres Art of Invention in Florence was the only given element of the tour we had to see how to make the trip as interesting as possible.

As for now it looks like we’ll be visiting the cities of Cologne, Nuremberg, Innsbruck, Verona, Pistoia, Florence, Milan, Zurich, Nancy, Luxembourg, Genk and The Hague/Leiden. Within a couple of days we received enthusiastic response from Swiss, Austrian and Italian labs, as well as the FabLabs in Luxembourg and Nancy. Great!

If you are in the vicinity of our route or if you feel you can contribute or want to participate during our stops, please let us know!